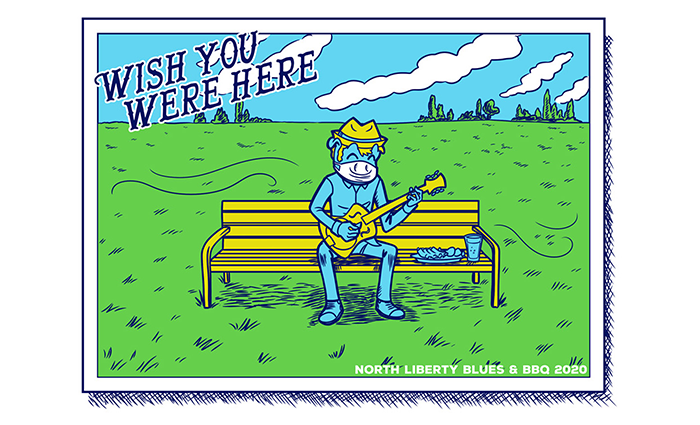 In April, the planning committee announced its decision to cancel the 2020 in-person edition of North Liberty Blues & BBQ presented by Veridian Credit Union due to the COVID-19 pandemic. But fans of the festival will still have the opportunity to have a taste of Blues & BBQ at home. This year, the 14th annual event is built for your backyard.

Full details will be announced later in June, but we couldn’t wait any longer to give you a sampling to chew on.

Even if 17,000 people can’t gather at Centennial Park, music can still bring us together. On July 11, we invite you to tune in to our North Liberty Blues & BBQ internet radio station, 12 hours of streaming music, interview and more. Tune in via the free Blues & BBQ app in the Apple Store or Google Play or online.

Instead a lineup of vendors, grab takeout from a local establishment, including special family-style packages from Jimmy Jacks and Mosley’s, who will also offer mixed six-pack of local craft beer curated just for the festival, featuring a can from Iowa Brewing Company, Backpocket Brewing, ReUnion Brewery, Lion Bridge Brewing Company, Big Grove Brewery, and Sutliff Cider Company. For the kids, grab some Blues & BBQ-themed coloring sheets and craft idea.

All of the details and links are available on the festival website.