Included in each City Council information packet is a memo from the City Administrator offering a summary and context of items appearing on the agenda. We will begin publishing these memos here in our news feed to make them more accessible. You can sign up to be notified of news items, agendas and more by email.

Due to the COVID-19 pandemic, public health and safety concerns require City of North Liberty public meetings to be held electronically, so as to limit the spread of the virus. The public is invited to submit questions and comments in advance of the meeting for consideration submitting them to the City Clerk Tracey Mulcahey via email at [email protected].

This meeting may be accessed live by the public on the internet at northlibertyiowa.org/live.

Tuesday’s meeting will be held virtually via Zoom and live streamed at Watch Meetings Live as well as available on the website. The City Council and participants will log into the meeting in order to conduct business while the public will be able to watch the debate and decisions being made.

The following items are on the consent agenda and included in the packet:

The FY22 social service funding requests consists of 17 applications totaling $147,905. The available budget for social service requests is $135,000. The applications are included in the packet, along with a summary of the requests and all agencies requesting funding are planning to attend Tuesday’s meeting.

Tuesday’s agenda includes the second consideration of an ordinance adjusting the current utility franchise fee from 0% to 2%. The previously approved Revenue Purpose Statement requires all revenues generated from this fee to be used for parks and trail projects in North Liberty. The third reading of the ordinance will be scheduled for May 11 and it is anticipated that the utility companies will implement the fee in July or August.

Since the April 13 meeting, several revisions have been made to the proposed ordinance based on staff’s interpretation of the Council’s discussion. Notably, the revisions include allowing two options for a pen area in the rear yard. Option 1 allows the use of chicken wire (currently not allowed) to establish a pen and coop area of up to 12 square feet/chicken. Option 2 allows for traditional fence material (not chicken wire) to be constructed as close as 10 feet to the rear lot lines. The intent of these changes is to provide several tools to chicken owners, accommodating more backyard space for chickens to roam without allowing access to the entire backyard. If the Council is amenable to the proposed revisions, an amendment to the zoning code, which requires Planning Commission review, will be required to allow for chicken wire as described in the ordinance. Other provisions that were proposed for amendment remain, including the deletion of noise and odor provisions that are duplicative of other code sections, elimination of the banding requirement for each bird, and requiring only one wing to be clipped. 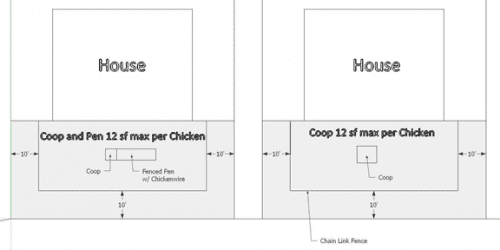 Greenbelt Trail II, LLC is requesting a zoning map amendment to RD-10 to allow 7.36 acres – west side of North Liberty Road approximately 700 feet north of Salm Drive – to be developed with 40 two-family dwellings and related infrastructure. After the zoning map amendment request to RS-6 for the overall property, the developer indicated a desire for this section to be two-family dwellings. The developer has stated that this area was selected because there would be less potential traffic conflicts with it not being along the main entrance to the subdivision and that the higher density development would be adjacent to the future school site. The request is consistent with the Comprehensive Plan Future Land Use designation, which is Residential. It is staff’s opinion that the RD-10 zoning is compatible with surrounding RS-6 Greenbelt Trail zoning and fits in nicely into the overall development. Two area residents attended the March 17, 2021 neighborhood meeting where no objections were expressed. The Planning Commission unanimously recommended approval of the request at its April 6, 2021 meeting. At the meeting there was a good discussion about affordable housing in North Liberty. Staff noted the challenge when demand, raw land and lumber prices are at an all-time high. Staff recommends approval of the zoning map amendment request.

Following the cancelation of Blues & BBQ this year due to the pandemic, City staff began exploring other options for smaller, outdoor events that could be held safely on City property, and one such idea was a bring your own beverage (BYOB) event. Similar events have been held successfully in other communities, but consumption or possession of alcohol in a public place is currently prohibited by ordinance in North Liberty. This proposed amendment is intended to provide some limited flexibility concerning that restriction, both for BYOB events, and looking forward to other events that might include alcohol sales from approved vendors. The amendment allows for the sale, use or possession of alcohol with the execution of an agreement with the City that strictly details the location, time, and manner in which those activities could take place, and requires licensure, insurance coverage, and indemnification of the City, and more.

Consumption and possession on city grounds would be permitted only in designated and agreed-upon times and places with the issuance of a special event permit, which will also carry such additional conditions as may be deemed necessary to protect the public health, safety and welfare. An agreement or a special event permit contemplated by this amendment does not allow for public intoxication. Staff recommends approval of the proposed ordinance amendment.

The City, in partnership with the Iowa Alcoholic Beverages Division, performs compliance checks at all tobacco retailers. Employees of establishments who sell tobacco products to minors during these checks are issued a criminal citation, and the cases are prosecuted as simple misdemeanors. Iowa law also provides for a civil administrative sanction against the retail permit holder. The compliance checks resulted in three convictions or guilty pleas, and the permit holders have all acknowledged the violations. One of those permit holders, J & A Tap, is entitled to use an affirmative defense and avoid the administrative sanction, because the employee in question had participated in the state’s I-Pledge training program. The resolutions in the packet accept each of the permit holders’ acknowledgement of their respective violations, and their payment of the applicable penalties. Staff recommends approval.

Sugar Bottom Bikes (SBB) is situated at 325 N. Dubuque Street, and will be affected by the right of way acquisition needed for the Dubuque Street Phase One project. SBB currently is permitted to display up to 100 square feet of merchandise outside, but the approved acquisition does not leave enough space for SBB to continue that practice. Shive Hattery has determined that slightly less right of way can be acquired without negatively affecting the project, and the reduced taking means that SBB will have room to continue displaying their merchandise after construction is completed. The smaller taking naturally requires less compensation, and the appraisal has been modified accordingly. This resolution establishes just compensation for the reduced taking based on the modified appraisal. Staff recommends approval.

Included on the agenda is an assessment resolution for fees associated with snow removal. This resolution includes seven properties totaling $674.80. Staff recommends approval of the resolution.

The public improvements for The Preserve, Part 4, which includes 24 single-family residential lots adjacent to St. Andrews Drive, have been completed and inspected. Staff recommends approval of the final plat, the storm water management facility agreement and easement.